Page 158 welcomes Carole Bumpus for a virtual author event in conversation with Caitlin Hamilton Summie about her book SEARCHING FOR FAMILY AND TRADITIONS AT THE FRENCH TABLE: BOOK TWO. This event will be hosted on our Crowdcast channel.

In this engaging new installment of Carole Bumpus’ heartwarming culinary  memoir/travelogue series, Carole and her trusted guide and dear friend, Josiane Selvage,  complete their gastronomic and cultural tour of France. The trip was inspired by Josiane’s  deceased mother, Marcelle, and in a touching tribute, Carole and Josiane also search for  Marcelle’s roots—a mystery created by the chaos of both world wars.  This second title works as a stand-alone and at the same time is a powerful companion  to the first volume, released in 2019.

Beginning in Paris and heading north into Nord-Pas-de-Calais, Normandy, Brittany, Loire  and completing the tour in the Auvergne, Carole searched for the traditional “cuisine pauvre”  (peasant foods) common to the French table, but she also treasured visits to cultural sites that  illuminated the French character and history: ancient cathedrals, a truffle farm, the troglodyte  caves in the Loire Valley, Mont St. Michel, and the Bayeux Tapestry.

As she traveled, Carole listened to French families describe their personal histories, the  myths and traditions unique to their communities, and learned the family recipes used for festivals and celebrations. But alongside the joy of discovering delicious dishes and making  new friends, Carole was reminded of the sobering economic and political realities of both world wars, and the ways those wars have shaped France, its people, and its cuisine. These realities  were made all the more poignant by Josiane’s efforts to uncover her mother’s family history.

A retired family therapist, CAROLE BUMPUS began writing about food and travel when  she stumbled upon the amazing stories of women and war in France. She has traveled  extensively throughout France and Italy, where she has interviewed more than seventy-five  families to date for her food and travel blogs. She published an historical novel, A Cup of  Redemption, in 2014, and her unique companion cookbook, Recipes for Redemption: A  Companion Cookbook to A Cup of Redemption, in August 2015. She is an active member in  The California Writers Club and The Women’s National Book Association. Bumpus lives in the  San Francisco Bay Area, where she teaches classes on writing, does public speaking, and  continues to write about women, food, and war. Visit her website at CaroleBumpus.com.

Caitlin Hamilton Summie is the former Marketing Director of MacMurray & Beck and of BlueHen Books/Penguin Putnam. At each company she also managed imprint profile and directed all publicity, hardcover & paperback. In addition, for nearly two years she simultaneously directed and handled sales nationwide for MacMurray & Beck.

In 2003, she founded Caitlin Hamilton Marketing & Publicity, LLC, an independent book publicity and marketing firm. In 2010, her husband, Rick, became a partner. They work in fiction, mystery, memoir, children’s books, and history and are best known for tailored approaches, passionate advocacy, and limiting client load to ensure maximum attention. Over the course of her career, in-house and solo, she has launched Susan Vreeland, Emily St. John Mandel, William Gay, Kim Church, Bren McClain, and many more.

Hamilton Summie wrote book reviews for The Rocky Mountain News, author profiles for ABA’s Bookselling This Week, and has published both short stories and poems. In August 2017, she published a short story collection, To Lay to Rest Our Ghosts (Fomite Press), to excellent reviews nationwide. To Lay to Rest Our Ghosts won The Phillip H. McMath Post-Publication Book Award, won Silver in the Foreword INDIES Books of the Year Awards in Short Stories, was a June 2018 Pulpwood Queen Book Club Bonus Book, and was selected for 35 Over 35’s Annual List, 2017.

Hamilton Summie is a former independent bookseller who earned her degrees at Smith College and Colorado State University, where she was awarded an MFA with Distinction.

Please note that this is a digital author event. We expect all participants to maintain an atmosphere of respect and fairness. Anyone who violates this standard of behavior including engaging in any form of harassment, may, at the discretion of the organizers, be immediately removed. 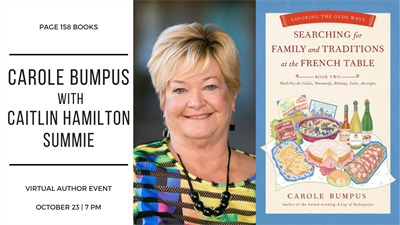