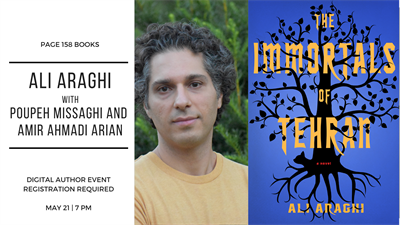 Page 158 Books is pleased to present an evening with debut author Ali Araghi in conversation with fellow authors Poupeh Missaghi and Amir Ahmadi Arian. This event is in partnership with Melville House Publishing. This event will be held online. RSVP here.

A generation-spanning novel infused with magical realism, THE IMMORTALS OF TEHRAN follows an Iranian family through the decades, up to the Iranian Revolution.

As a child living in his family’s apple orchard, Ahmad Torkash-Vand treasures his great-great-great grandfather’s every word. On the day of his father’s death, Ahmad listens closely as the seemingly immortal elder tells him the tale of a centuries-old family curse, and the boy’s own fated role in the story.

Araghi has expertly interwoven the family history with the history of Iran, a complex history that comes to life through the protagonists as they struggle through decades of famine, loss, and political turmoil. As the story of the men and women of the Torkash-Vand family unfolds, the family's curse hovers above their stories and intervenes in their lives, resulting in a breathtaking story about the power of words and the revolutionary sparks of love, family, and poetry.

An Iranian One Hundred Years of Solitude, THE IMMORTALS OF TEHRAN is a breakout debut from a promising young Iranian writer, now living in the United States and writing in English.

About the author: Ali Araghi is an Iranian writer and translator. He won the 2017 Prairie Schooner Virginia Faulkner Award for Excellence in Writing, and has published stories and translations in Prairie Schooner, Fifth Wednesday Journal, Asymptote, and Hayden’s Ferry Review, among others. He lives in St. Louis.

In the aftermath of Iran’s 2009 election, a woman undertakes a search for the statues disappearing from Tehran’s public spaces. A chance meeting alters her trajectory, and the space between fiction and reality narrows. As she circles the city’s points of connection—teahouses, buses, galleries, hookah bars—her many questions are distilled into one: How do we translate loss into language?

Melding several worlds, perspectives, and narrative styles, trans(re)lating house one translates the various realities of Tehran and its inhabitants into the realm of art, helping us remember them anew.

THEN THE FISH SWALLOWED HIM by Amir Ahmadi Arian

Yunus Turabi, a bus driver in Tehran, leads an unremarkable life. A solitary man since the unexpected deaths of his father and mother years ago, he is decidedly apolitical—even during the driver’s strike and its bloody end. But everyone has their breaking point, and Yunus has reached his.

Handcuffed and blindfolded, he is taken to the infamous Evin prison for political dissidents. Inside this stark, strangely ordered world, his fate becomes entwined with Hajj Saeed, his personal interrogator. The two develop a disturbing yet interdependent relationship, with each playing his assigned role in a high stakes psychological game of cat and mouse, where Yunus endures a mind-bending cycle of solitary confinement and interrogation. In their startlingly intimate exchanges, Yunus’s life begins to unfold—from his childhood memories growing up in a freer Iran to his heartbreaking betrayal of his only friend. As Yunus struggles to hold on to his sanity and evade Saeed’s increasingly undeniable accusations, he must eventually make an impossible choice: continue fighting or submit to the system of lies upholding Iran’s power.